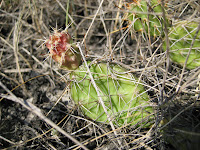 alberta to many is, ecologically, prairie, mountains and boreal forest. but my favorite parts of this province is its deserts.

we spent the weekend camping at big knife provincial park, down on the battle river between donalda and forestburg, and not too far from stettler. we watched american white pelicans soaring in formation overhead. we heard a night-heron. we ran into prickly pear on yesterday's sun-soaked walk. and we were up all night friday -- the entire campground was -- with the most astonishing electrical storm i've ever lived through. did you know that thunder isn't a single sound but actually about four in succession? there's the pistol shot that starts it off, then the proverbial furniture-dragging rumble, and then it trails off into a hollow movie sound effect. some of the lightning on friday night struck less than 500 m from where we were camped. thankfully it wasn't until morning that i remembered to be afraid of tornadoes.

now that i'm home, i realize the real tornadoes, the ones to worry about, are the ones in your day job.
Posted by Heather Zwicker at 7:52 AM

family had a wedding near wildrose this weekend, and we have long connections to both forrestberg and killim, love that town.