and so we set out to prove ourselves.

i learned to camp as a kid, in one of those big ole canvas tents, the kind that was completely moldy by the second trip. we moved up to a pop-top van, in which my parents, my sister and i "stamped around alberta" in the province's 75th anniversary year, and then drove across canada -- several times. when we went to europe, we didn't stay in hotels: we rented a vanagon and put ourselves up wherever the fancy took us. you don't get any more "camping people" than that.

my ex jennifer called the kind of camping i was used to "car camping," as distinct from "backpacking," where, you know, a campstove is a luxury. i played it cool, mostly because i didn't want to ruin the relationship by admitting that only when hell froze over would i schlep a therm-a-rest on my back for the privilege of shitting in the woods and hoisting freeze-dried food up onto a bear pole. happily for heather, jennifer's knees weren't up to backpacking by the time we met, so we made do with whatever you could fit in the back of a nissan acura. too bad!

camping with mo has been perfect, and only got better when she insisted, five years ago, that we buy a little tent trailer. "but i like camping in a tent," i lied. "and think of the ecological footprint." (okay, maybe we didn't talk exactly that way in 2003, but my dignity was at stake so i'm sure i said something appropriately guilt-inducing.) i balked even more when the salesman called it an "entry-level RV," but mo persevered -- apparently her dignity was at stake too, something about not sleeping on the ground by the time she was 40 -- and so we bought The L'il House.

it's really been perfect for us. with all the sides opened up, it's like sitting in a gazebo: cool breezes, no mosquitos. there's space for two big personalities, nieces and mothers-in-law. we can plug in our computers at a power site and we're safe (safer, anyway) from bears. most important of all, acquiescing to the tent trailer has preserved both my wild-child-of-nature identity and my moral high ground, while making a significant concession to the relationship.

and isn't that what camping's all about, when you get right down to it? is there anything better than turning up your nose at the obscene RV, the bus pulling the land rover? yup: kicking back in that very RV, ice clinking in a cocktail glass while you catch up on whatever's coming through the satellite dish. everybody's happy in a campground: the people who drive to the woodpile and the people clucking at them disapprovingly, the women elbowing for mirror space at one of the two sinks in the bathroom and the woman lolling in her spa-like damon tuscany, the good ole boys with all the tarps and the ascetic hikers sipping herbal tea while they shiver under the stars.

as for us, this weekend: we had a great time. the weather was awful, gloomy and pissing rain most of the time, and certainly every time i had to trek to the other "little house." it was so cold and damp that by the second night i had developed a tubercular hack. being out of practice (i tell you, having friends with a condo in canmore nearly put paid to our camping selves), we didn't bring enough food, and the hike we chose to do involved an unrelieved 7% grade and all the mosquitos in tarnation. sure, it ended at the miette hot springs -- but we had to share it with a hundred screaming teenage girls.

what with all that roughing it, we felt utterly justified, on our way back to the l'il site in wabasso, in stopping at the tekarra lodge dining room, shorts and all, where we enjoyed a deconstructed avocado-and-lobster roll (heather), baby spinach with candied walnuts tossed in a citrus vinaigrette (mo), macadamia-crusted arctic char with a ginger remoulade (heather), and pan-fried chicken with banana sauce and organic vegetables (mo).

shawna lemay's site, capacious hold-all, is running a feature where women writers talk about their purses. as shawna puts it, "there has been a fascination with artist’s and writer’s workspaces." her challenge: "the purse has been seen as an honest time capsule, an archive, a little house, a portable boudoir. what do you take away with you in your hold-all? is it flimsy, sturdy, practical, frivolous? what secrets does it contain?" take a peek!

(yes, maybe i wrote something on hothead paisan and the birkin.)
Posted by Heather Zwicker at 8:21 PM No comments:

My niece the feminist

my second-oldest niece, who's ten, has been reading a book about a girl in afghanistan who has to dress like a boy in order to be out and about in her neighbourhood. my mom asked laura, "what do you think about that?" laura said, "i think it's silly. after all, the first person on earth was a girl. everybody knows that." my mom frowns at the rush-hour traffic and tries to figure this one out. "you mean lucy?" "yeah, lucy." laura grows reflective for a second. "maybe that's why men want to run everything. but it's silly. everybody knows that the only thing men are better at than women is hot-dog-eating contests."
Posted by Heather Zwicker at 3:33 PM 1 comment:

you know when you have one of those days when absolutely everything goes wrong? whatever is the opposite of that, that was today.

riding to the gym, i saw a woman on the bike path ahead of me who appeared to be littering. but it turns out, she was walking along collecting other people's litter. i was still smiling when i got to the gym, only to discover i'd left my gym card at home. "no worries," said the guy behind the desk, "we'll just look it up." when it was time to do yard work, a huge thunderstorm rolled in -- and now i'm listening to the rain hammer our sound tin roof while looking at a rainbow.

i know: this is so nauseating you're not even reading anymore.
Posted by Heather Zwicker at 8:29 PM 1 comment:

i have neglected my audience. worse, i don't have a good excuse. taken individually, none of these things adequately explains a two-week silence, but altogether? maybe you can find it in your heart to forgive me.

first, there was ron the roofer. he was here every day, except when he didn't show up. he would typically say, "see you at 8 in the morning." at 9:15 he'd call to let me know he was running late "but i'll be there by 9." most people would wonder at that, but not me. we signed a contract for this job in april of 2007; by late june 2008 i was convinced ron worked so slowly that he actually could move back in time. it was like a bad marriage, me and ron. i nagged and he acted sheepish. he'd want to explain himself ("you wouldn't believe the mess i had to deal with yesterday") and i wouldn't listen. as with so many bad relationships, ours ended with a stupid fight, this one about who put the good sheet over the printer. i yelled and slammed the door, he stopped speaking to me, and although he still has a housekey, i'm not keen to call to get it back.

then there was the bomb incident. about 1:30 AM we heard a loud bang. the next morning, we discovered a melted bottle on our front lawn. things with ron had not deteriorated to the point where i suspected him, and what with the egging and the graffiti earlier this year, we figured we should call the cops about this one (and by "we," mo meant me).

"yeah, uh hi. i'm calling to report that someone set off a bomb at our house last night? well, maybe not a bomb -- bomb is a big word, i'm sure this was nothing -- but then again there've been a couple other worrying incidents lately, and sometimes i take pictures of the drug dealers on the corner, though mostly it's a pretty good neighbourhood, but there was just --"
"ma'am, what is the nature of your complaint?"
"i'm calling to report a homemade explosive," i said, decisively.
"what makes you believe there was an explosive device, ma'am?"
"what makes me believe this? well, last night we heard an explosion and this morning we found the remains of a plastic bottle on the front lawn."
"did you retrieve the device, ma'am?"
"yes, i did. i'm sorry, should i have left it there?" i'm suddenly flustered: i've seen CSI, i know you're not supposed to disturb the crime scene. but they weren't really going to send out a team to investigate. were they? "i guess i should have left it there."
"ma'am, are there any burn marks on the bottle?"
i peer more closely. "no, actually, there aren't. now that you mention it." i'm starting to feel a little silly about the whole thing.
"what makes you believe the bottle was exploded, ma'am?"
"well, the side of it is totally melted. there's a milky white residue around the edges, though i guess that could be just be where the plastic itself melted... oh, and," i add triumphantly, "the lid's still on!"
"is there any sort of a label on the bottle, ma'am?"
"a label? uh, yeah. it's dasani water. lemon flavored. is that what you mean?"
"it's a lemon-flavor dasani water bottle with no discernible burn marks on it. is that correct?"
"yes."
"ma'am, it sounds to me like what we have here is a prank. what youths sometimes do is take mentos -- that's a type of candy -- and insert them into a bottle of flavored water or soda. when they shake the bottle, the combination of ingredients initiates a chemical reaction that can cause the bottle to burst. there are videos of this phenomenon on youtube, ma'am, if you're familiar with that site."
"yes, i'm familiar with youtube. and i know what mentos are!"
"does this sound like a possible scenario, ma'am? are there young people living in your neighbourhood?"

so it all fizzled out, so to speak. but as you can imagine, i needed a couple days to recover -- and to catch up on my david letterman stunts, since apparently even david letterman has done the diet-coke-and-mentos trick.

then there were four days in the mountains -- glorious! -- where i had a run-in with another caustic combination: spray-on sunblock and red flipflops. basically, the banana boat sunscreen peeled the red color off my flip-flops and deposited it onto my feet, turning them the color of sweet and sour chicken balls. when i came home that afternoon, i tracked pink plastic all over the hardwood. nothing seemed to lift the color off -- until i had the bright idea to spray the sunscreen directly on the floors: bingo. came right up, and left a nice polish behind. that's also how i cleaned the tub.

when we came home from the mountains on canada day, we discovered that ron had moved out while we were gone, leaving a certain amount of dust behind him. not one to dwell on bygones, i suggested that we tackle the upstairs bathroom, which we immediately set out to do. "pimping," i think kids today call it (or did, twenty minutes ago). 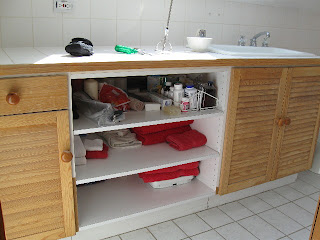 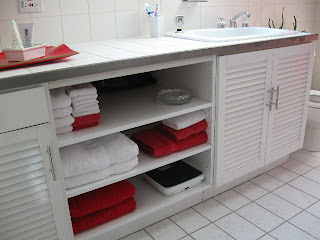 isn't it amazing what you can do in two days with a couple hundred bucks and a bottle of spray paint?
Posted by Heather Zwicker at 11:24 AM 1 comment: