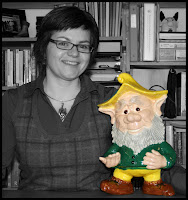 kinda makes you wonder what you get if you lose, doesn't it?
Posted by Heather Zwicker at 9:16 AM 1 comment:

i was waiting for my turn at the save-on-foods deli counter when a fellow shopper struck up a conversation. "do you mind my asking: how do you tie your scarf so that it hangs like that?" i was startled and pleased. it's what i think of as the sydney look, though everybody does it now. i studied other scarf-wearers in australia, 2002, until i learned the loop-it-doubled-around-your head-and-poke-the-ends-through trick. i was pleased she'd asked and happy to demonstrate, there in front of the cold cuts. "oh!," she said, "you double it up." she pondered for a second. "i wonder if my scarf is long enough?" i said i thought it was. it was a very pretty scarf, red with flowers embroidered on it, and i asked whether she'd done the needlework herself. she laughed, sounding embarassed. "no, heavens no, it came that way. from india." i said it was lovely.

my fellow customer pulled her scarf off and said she'd try it! i coached her through the motions, she worrying all the while that the scarf wouldn't be long enough, but of course it was. "bravo!," i said, "it looks perfect."

(i ordered a couple sticks of chorizo: no, not german sausage, the mexican one. bright red. yes. right. two please.)

my new friend seemed quite pleased with her look but confessed that she was a dunce where these matters were concerned. i said, "oh, i know what you mean! i bought a shirt recently that came with an online instructional video detailing all the ways you could wear it. the sales clerk talked me into trying it on, and the second i did, i realized that i really wanted to be the kind of person who could wear a shirt like that -- bold, whimsical, playful and so on -- but the second i got home i realized the shirt was smarter than me." "an instructional video!," she said. "i think it would be a long time before i bought a shirt that came with an instructional video." "i know," i agreed, "right?"

i picked up my sliced turkey, smiled, and turned away.

a few minutes later, she came after me.

"you," she said, and leaned in for emphasis, "you are a treasure. never forget that!" she slid something into my cart and scuttled away.

between the clamshell spinach and the snap peas was a hand-lettered red envelope saying "Just For You." inside, a card, generic enough, the kind you buy in packages of eight or ten. the picture is a hanging flower basket. inside she has written, "Your bright cheerful attitude is such a blessing to everyone around you. Jesus loves you with a never ending unconditional love." behind the card is a pamphlet called "Steps to Peace with God," and inside that, a ten-dollar bill.

of all these things, it's the ten bucks i find most discomfiting. the card is sweet and although i find the sentiment a bit creepy, i can see that it comes from a good place. it's pretty cool to walk around a grocery store handing out cards to strangers, and you can bet i filed that one away for future use. but ten dollars? ten christian dollars? i still think of ten bucks as a lot of money -- more than you'd give to a stranger. she stuck a post-it note to the bill saying, "relax and treat yourself to a special coffee break." does special coffee cost ten dollars? i guess so.... but do i look like i can't afford my own special coffee? do i look like i need the money? i don't think i need it. i'm bad with finances, no doubt, but honestly i make a good living. no, i definitely don't need ten dollars from this woman. in fact, i'm pretty sure i'm better off than she is: after all, didn't i learn how to tie my scarf six or seven years ago on a whole other continent? i wondered if i should go after her and say excuse me, sorry, that's really sweet and i see where you're coming from, but aren't there tons of other people that could really, really use ten dollars?

what am i going to do with it?

i'm lying a little here. the really discomfiting part, though for all the same reasons, is the line, "I'll be praying for you."
Posted by Heather Zwicker at 4:33 PM 7 comments: