The pleasure of being mo

a sunny sunday afternoon, olympics all day, a black cat on the back of the recliner, laundry thumping away in the basement, and a montreal smoked meat sandwich on white bread for dinner - in front of the canada-US game on TV. i do love that girl.

How to fix things using money

i like to think being a "committed materialist" means more than just an approach to interpreting literature. and so here is a list of things i've bought for my convalescence:
next up: cute PJs and one of those retro ice bags.

thank god i live in canada and don't have to pay for the surgery itself.
Posted by Heather Zwicker at 12:31 PM 3 comments:

How we eat now

for me, growing up in edmonton in the '70s and '80s, food was a source of aspiration - aspiration to adulthood, to wealth, to sophistication. my image of being a self-realized grown-up was precise. the city was toronto, the season was winter, and the partner was mark. i saw myself coming home from an exciting day as an academic (i had no idea what graduate school actually involved, how infrequently you'd actually leave the house, but never mind) to a 1920s apartment building with thick white paint peeling off the door, which opens to billows of steam: mark is making pasta. the sound of cello and the aroma of tomatoes, garlic and basil envelop me in a reassuring cloud of insulating cosmopolitanism.

while waiting for high school to end and this magical adult moment to arrive, i would visit the food floor at woodward's on breaks from selling men's shoes on main. the woodward's food floor is the first place i saw a delicatessen-style counter. they are commonplace now, whether genuine or merchandising tricks flogging saputo as local, repackaging maple leaf to look artisanal, but in 1983 the woodward's food floor was where white people learned to browse exotic cheeses. i embarrassed myself mightily by asking for "gorGONzola," but i forgot all about that when i cooked it with real mushrooms (real mushrooms!) in a four-cheese sauce. i served it over fresh pasta, another revelation (it was the '80s); the recipe came from the silver palate cookbook before julee rosso and sheila lukins, those indefatigable manhattan purveyors of whimsy and excess ('fly to another city for lunch!,' 'use a round of stilton for a striking centrepiece!,' 'for your next tailgate party, hire a hot air balloon!') parted ways. my mother's 40th birthday was that year, i believe, and we took her to avanti, a white-tile nouveau italian restaurant with crisp cobalt trim.

i thought i would eat like that forever. truth be told, i did pretty well in graduate school, something about living within walking distance of an organic grocery and downstairs from a landlord who liked to try out his recipes - croque en bouche, saffron-scented pilaf, four-course tuscan feasts - on a willing party. but cooking with a full-time job seemed beyond me. by the end of the 90s, mo and i had descended into a four-dish rotation with seasonal variations: lentil soup, stir-fried vegetables with tofu, shepherd's pie, beef stew in the winter; caesar salad, hamburgers, green salad with apples and cheese, steaks in the summer.

one day, i reached my limit. i simply couldn't face another lentil soup, so i set out to expand our range of foods. i learned my way through categories like root vegetables, pork chops, grains. turns out i do like butternut squash, don't like acorn squash, and now i know how to make a beet palatable, something i thought improbable. (best use of a beet: raw, in a salad with granny smith apples, mild feta and fresh mint under a lemony white balsamic vinaigrette.)

we've done well enough that a typical weekday meal here now involves 2 or 3 different vegetables alongside an interesting protein dish. turkey scallopini in mustard cream served over brown rice and sauteed spinach is a staple chez nous. we eat red peppers almost daily. last wednesday we had moroccan chicken (gourmet magazine cookbook), pomegranate-glazed carrots (fine cooking #101), asparagus spears in orange-tamari marinade sprinkled with candied ginger (something i made up) along with a simple nutted couscous. we also like to roast things, as in tuesday's dinner: portobello "chick'n" lumps (from the frozen food section), matchsticked parsnips and carrots with thyme butter, sweet potatoes with rosemary and garlic, tricolor peppers finished with feta and balsamic. it's a simple meal - it all goes in the oven - but thrills the eyes and mouth. it's more than i thought you could ask of a tuesday.

this is how you can live when you don't have children - and perhaps when you do, though i can't fathom how you'd manage it. i have become so habituated to this style of cooking and eating that i have forgotten how to do things differently. as a result, i feel quite panicky about not being able to cook post-surgery. i'm trying to store up some things ahead of time - chicken with pumpkin seeds, carrot ginger soup (good for nausea, i'm thinking), spinach bechamel lasagna, black bean soup, lentils - but with cookbooks tacitly subtitled either "make it tonight with what's just off the vine" or "how to devote 18 hours to a ganache," i'm finding it hard to think of things you'd make in advance and cook from ... the freezer.

i suppose i'll think of it as just another constraint - like cooking without leeks-onions-scallions-shallots, or figuring out how to use all the broccoli and bananas we get from our grocery delivery service each week. i enjoy the challenge of cooking-with-constraints and have long thought that a better version of iron chef would be teflon mama: "you have 45 minutes to feed four hungry people. the fridge/freezer contains two kinds of mustard, half a jar of pickles, a few sun-dried tomatoes, a cup of milk, two tablespoons of raspberry jam, three wizened carrots and a chicken breast. go!"

suggestions would be welcome.
Posted by Heather Zwicker at 4:49 PM 1 comment:

In which the oracle gives a tiger to a horse 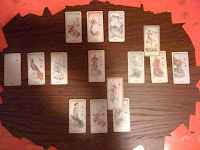 i like the tiger in the centre, of course - a strong start to a strong year - but as always the tiger also indicates conflict with authority. (who, me?) moving to the east, the quadrant at the bottom of the photo, and representing the self: the peacock, the mature lady looking into a mirror warns that success brings pride, which may lead to vanity. "overbearing self-confidence" is another way the oracle puts it. the insect in the third position is a surprise (i'm more of a jade girl, the endless hard work, the perfectionism) but i take it the insect refers, perhaps, to the scurry of post-op care? it's being watched over by the orchid guardian, pleasure to work, inversely represented in the south (right quadrant) where the woodcutter guardian (hard work) looks over the carp, card of sagacity, pleasure, longevity. interesting. what exactly is the oracle suggesting about the relationship between work and play, between refinement and rest, activity and consequence?

the inner me (position 2, back in the east) is the unicorn. the unicorn! i don't think i've ever pulled the unicorn before. the unicorn represents honesty and foreknowledge, possibly even clairvoyance. look for her again up in the west, where this "urgent need to see into the future" is obstructing me - along with the north (pain, privation, poverty, distress: who wouldn't be opposed?). the way through? (position 8): the knot, the most enigmatic of all the signs. something needs to be tied or untied; what that is, only the spread can tell. see tiger.

then there's the north, the mysterious long-term future (represented by the left quadrant). first the white card, the page waiting to be written, the document to be realized, the contract to be signed. second, the phoenix, a bird that exists only in the reign of a benign emperor and that promises joy and splendour. third, the enigmatic mushroom, signifying something "so wholly unexpected that the querent will be forced to recall the oracle's foreknowledge of a remarkable event."

should be an interesting year.
Posted by Heather Zwicker at 10:43 PM 2 comments:

that's what they call what's wrong with my rotator cuff, and they're fixing it on 25 feb. they open up the shoulder, send in a little camera, and make a to-do list for while they're in there. might as well shave that bone. could check the bursa. and is that tendon what's causing the impingement?

the operation is done with me sitting up - "but they strap you in," said the pre-admission nurse, helpfully. it takes about three hours and requires one overnight in the hospital. then i spend six to twelve weeks with my right arm in an immobilizing sling.

let me repeat that: six to twelve weeks.

and i have been thinking about it - mo's insisted i do, even though she doesn't know that's what she was saying. she said, "practice with your left!" i'm glad i have because it demonstrates that i have no idea what i'm capable of. not in that character-building way; in that complete-absence-of-judgment way. brushing my teeth is messy but doable; however, i almost took out my own eyeball with the hairbrush. i can make coffee, allah be praised - but feeding the cats? i anticipated that it would be hard to open a pull-tab can with one hand, and it was, but the real poser was how to dish out the food one-handed. you stick a spoon in a can and then more or less chase the can all around the counter. on the other hand, so to speak, i can flip an omelet left-handed. who knew?

more than anything, after an hour of practicing i was mentally tired. it was incredibly hard to actually think about every little thing you do. how do you pull up a knee sock one-handed? (slowly.) how do you get coffee and the newspaper back up to bed with you? (two trips.) how do you grind pepper? (you don't.) it gives you huge respect for what babies must feel like at the end of the day - at the end of every day: hours and hours of trying to figure out the simplest little things, in a body that won't behave the way your mind says it should, turns out to be exhausting.

but what i anticipate to be really really tiring is being tolerant. as i'm fond of saying, i can only be who i am, and who i am is ... particular. fastidious. fussy. (some people use unkinder words.) post-op, i am going to be ridiculously dependent on mo, who is going to be working ridiculously hard managing - well, everything. here is a likely scenario: she will come home after a full day at work and start fixing us dinner, based on whatever she's picked up on her way home. in the course of unloading the dishwasher so that she can reload it so that she has room to make dinner, and with the cats yelling at her for their supper, it could be that she puts the bowls, or the cups, or the glasses, or (god help us) the plastic containers away in the "wrong" order. i will see it. i might have to actually watch it happen. and i will have to live with it.

i mean, consider the alternatives for just a second.

right? surgery will make me a more tolerant person, or it will give me a stroke.

my only hope is the painkillers, which i hope are strong and plentiful. 'cause i have a feeling i might have to share.
Posted by Heather Zwicker at 11:04 PM No comments: