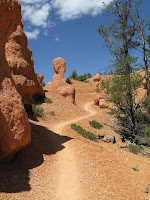 mountain biking is, in a word, fucking awesome. it's fast, it's aggressive, it's technical, it's demanding, and it's dangerous. in other words, perfect.

i wrote those lines before biking thunder mountain. if you don't want to read through the whole story that follows, here's a video of the ride that i made: http://www.youtube.com/watch?v=knReQUMSqdA. make sure you don't miss the 3-minute mark.

oh, wait. that's right. i didn't make that video, some 19-year-old boy did. which should have been my first clue. but it wasn't my first clue; my first clue was the witless ranger at red rock canyon visitors' centre. mo and i walked in the other day all eagerness and cute, saying, "tell us everything! we want to mountain bike, and we hear it's good here. 'zat true?" even at the time i didn't think the fat sheriff behind the counter was terribly convincing as a ranger, but he pulled out a trail map and said, "thunder mountain trail's nice." it was clear that that was the end of the conversation. his impassive face left no doubt that i'd have to take up my why-is-the-river-in-zion-so-grey question somewhere else.

even after hiking 10 miles of bryce yesterday, i was curious to see this trail. in fact, i was curious to see a few of them. i figured i'd bike thunder mountain first, then toodle around up in butch cassidy country. losee canyon was supposed to be good, though i noted it was rated "strenuous." something to keep in mind. i double checked the trail guide, which describes the thunder mountain trail, in its entirety, as follows: "The upper section of the trail travels through a ponderosa pine forest, while the lower section features spectacular red rock scenery. Moderate to strenuous."

here's one thing the trail guide might have indicated: the 6-mile, 1200-foot uphill to get to the trailhead is in addition to the 9 miles of single track. but no matter. there's a paved bike trail next to highway 12 for much of it, and i fell into conversation with a guy named dave who's riding across the USA. we talked mileage and muscle groups, regular snacking and the ups and downs of nevada, and the ratio of money to miles ("i can't spend more than one dollar per every two miles," he said, "all in," suggesting that he'd been alone too much of late). why is he riding now? "timing's pretty good," he said, "i just got out of the navy and i'm heading to college in the fall." his business card, which advertises his blog, reads: "we will all die but very few of us live."

we parted ways at the fremont ATV track, and i headed up to the trailhead. by the time i arrived i was feeling limber if a little tired. it had been 65 minutes of uphill since i left the car.

and what's in the trailhead parking lot? a silver lexus. and getting out of it, That Guy: early 60s, short grey moustache, super nice bike, nice wife, and a full kit of high-end, matching gear. his tight black shirt was bulging a little over the too-much-good-living pot belly. he looked like the kind of guy who'd buttonhole you to explain how the economic downturn is actually good. meaning, good for him. meaning, he didn't mind that he'd lost his job as an investment banker because his quality of life was so much better now. 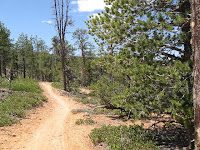 i pedalled on. this must be the ponderosa pine forest described so fulsomely in the trail guide. the trail is really narrow, maybe a third of a typical hiking trail. i'm wondering how horses can manage such a narrow trail, and i'm wondering how there can be yet more uphill -- when all of a sudden the trail disappears into a sweet moment of downhill relief followed by a sharp turn. somewhere in the middle of that first hairpin turn i discovered what it meant to share a trail with horses.

let me put it this way: if you careen downhill on a narrow path barrelling toward a hairpin turn, and if there is a pile of wet horseshit right at the crucial spot, you will wipe out. and it will not be pretty.

and what's this? more horses. 20 of them, in fact. i pull off the path as i'm told and report that there's one more biker coming. the women in the group are agog. "how often do you do this?," asks one. "oh, every day," i joke. "actually, i'm from canada. if i'd had any idea what this trail was like, i'd never think of trying it." "oh, well, then. that makes more sense," says one rider. the rest of them laugh in agreement. what is that supposed to mean? "are you really doing this alone?" "sure," i say. "isn't it a great day for a ride?" "well, you just go for it!," says a third woman. am i imagining that she shoots a meaningful glance at the rest of the riders?

Investment Man is now beside me. "so!," he says. "yeah," i say. "you been riding this area long?" "oh, not really," i say. "we did a little up in moab, but -- " "yeah, it's hard to find good single track," he says. "if you like sliprock, you should try gooseberry mesa. it's great. it's pretty level, not even an uphill as long as this, but there's a whole bunch of trails up there, about half sliprock. yeah, and i've ridden some moab trails too." there's a minute pause before, "you know, i'm only wearing this safety gear [elbow pads, knee pads] because i spent more time on my elbows and knees than i wanted to, there on gooseberry mesa. that rock isn't too forgiving! so, that's what that's about. where you riding next?," he presses. i tell him we're going home, then, to be polite, ask "you ride solo, mostly?" "yeah," he says. "the wife has a comfort bike, but..." he shrugs. "...but she drops you off at the trailhead in the lexus," i finish, in my mind. i indicate that i'm going to have my lunch, and he should go ahead. "oh okay!," he says eagerly, "that way you can pick up the pieces of me later. heh heh heh."

when i remount i can feel my legs -- the hiking, the uphill -- and start to wonder whether i really will do those other trails today. but no need to decide yet. i still have the best part of an hour on this trail. 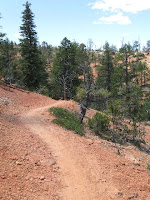 make that the best part of three hours. 'cause here's what they don't tell you in the trail guide. the path doesn't just "travel through ponderosa forest," it goes up, and i mean up, the outside of a ravine to a sharp left turn so it can rush downhill into the cleft of the next, hairpin right turn to climb out of that ravine -- and so on.

it does this roughly 142 times over 2 miles. 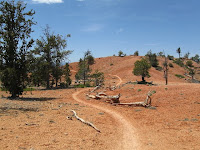 that's the ponderosa forest bit. so you can imagine my relief to hit the transition to the red rock canyon bit. "this must be the moderate part," i thought. 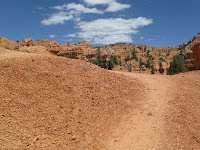 for one thing, the trail is mostly sand and scree.

for another, it noses precipitously near the edge.

for a third, the uphills and the downhills are really really steep. the hairpins are really really sharp. and the horses, it turns out, aren't bothered by kicking large rocks into the middle of a six-inch "single track." they do just fine. but look closely at these pictures and you'll see that mountain bikers routinely pitch over the edge. 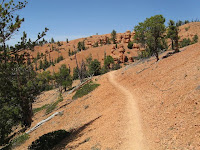 also, the trail is long. like, really really long. way longer than it's supposed to be. way longer than i was expecting. when i saw how far the trail stretched out in front of me i was so gobsmacked i stopped dead -- just stopped pedalling so that i wouldn't run over my own jaw lying slack on the scree. which means that i immediately went ass over tea kettle sideways downslope, until the abrupt and thorough penetration of a petrified branch into my left heel brought me to a halt. 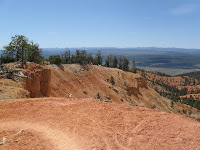 by this point i am walking, dragging, cursing my bike more than i am riding it. i would give anything for a conversation with Investment Man. i wonder whether navy dave has made it to escalante. i can only remember the first part of his motto.

did i mention that the wind howls across the ridges until it's all you can do to keep your balance?

if i'd had any idea what this trail was like, i'd never think of trying it. 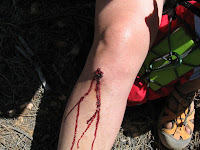 walking down a hairpin turn, i lose my footing, lose my bike, and then lose the skin over my knee. i learn another thing: dust helps blood clot.

i round another corner and OH MY GOD IT'S INVESTMENT MAN'S TORSO!

or, wait, maybe it's just a big lump of red rock.

i skip the side trip to inspiration point, since the only thing i would find remotely inspiring at this point is the sight of the jeep.

cross my heart and hope to die, if i make it out of this alive i will never mount a bicycle again as long as i live.

it is pretty, though. 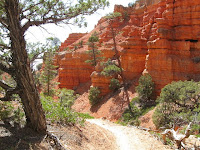 well, i'm keying this blog so you know how the story ends. ever so gingerly i make my way out of the canyon. when it seems that the path is well and truly level, i stop under a tree for a granola bar. two agile 40-somethings happen by. "hey," they ask, "are you okay?" "oh, yeah, sure," i say, "it's just a flesh wound." one of them peers at me more closely. "you're not wearing removable clip shoes, are you?" "nope," i agree, "i'm remarkably ill-equipped for a ride like this." "how was it?," asks the other guy.

this is the greatest thing i've read in my entire goddamn life.

... and that's why the idaho reeses taste so good!

so fucking proud of you dude!