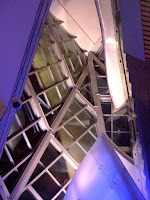 i'll admit that when my sister sent out an APB earlier this week begging for volunteers to staff the AGA's opening days, i put myself forward for the love of my sister rather than the love of standing around all day checking coats.

i was wrong. the reason to do it is just to be there.

i've rhapsodized about the space before - more than once - but let me say it again: the building is stunning. i love looking at it from the outside. i love looking at it from the inside. i love being in it. i love the way it feels and i love the way it makes me feel. i love the way it moves people, literally and figuratively. the looks on people's faces! edmontonians own it already, some of them because they built it. one guy said, as he made his way up the stairs, "i had something to do with this railing": wonder in his hands. another woman couldn't wait to tell me that her girlfriend was one of the metalworkers.

if you have to be stuck in the eternal present of standing and waiting (milton), then you'd want your here to be the AGA and the now to be its grand unveiling.

another thing to like about the gallery - and this riffs on jo-ann's comment to friday's post: the AGA takes its audience seriously. the first stop on the tour was the janet cardiff and george bures miller installation the murder of crows, a challenging piece in every sense. stereotypical middlebrow audiences probably do not expect to walk into an installation of 97 stereo speakers and one gramophone conveying a 30-minute soundscape lamenting the horrors of war and the terrifying seductiveness/seductive terror of dreams. but they were gamers, curious and open-minded, taking it all in. (the best part about working that gallery was seeing how the sound of a single human voice, even a sleepy slurry one, refocuses a room. the dream brought everybody back from the perimeter.)

and speaking of that - being part of something bigger than yourself - it's always cool to be part of the inner circle, and volunteers get treated well. for the day you're working, you're the heart and soul of the gallery, the without whom, fed and watered and thanked profusely, given access to the secret volunteers' entrance. even though the work itself is a lot like retail, the day is actually nothing like it, since you don't have to do this job, you're doing this job because you're a good person. ok, so it's not the grand dame of edmonton volunteer gigs - it's not folkfest - but it takes the edge off not being rich enough for friday night's gala and not being artsy enough for saturday's.

people dressed up! women wore skirts and suits and dresses, tall boots, heels. many men wore jackets, some ties, one, a tux. a precocious seven-year-old walked through the galleries with her notebook and pen at the ready. a suave long-haired high-school boy pronounced the AGA "sweet." churchy-looking people approved. in spite of the hurry-up-and-wait, nobody wanted to miss a thing, or at least that's what they told me when i offered to fast-track them past the line-up for the storm room directly into karsh.

i know where they're coming from: if you're really going to be here, you shouldn't miss a thing. 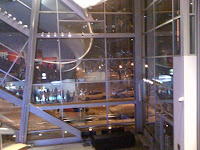 Posted by Heather Zwicker at 11:07 PM

My most favourite thing? The number of FAMILIES taking it in. The brave number of moms and dads and aunts who brought their toddlers, babes-in-arms, preschoolers through every single piece - and stayed, and encouraged. I saw women sway to the rhythms of voices and dance to the cacophony of music with toddlers perched on their hips. I saw women and men stoop down to see from the wee one's perspective what those speakers LOOKED like, and more, how they sounded from down there.

My favorite comment of the day? The woman in her early 60s who came out of Murder of Crows and said to me, "that was...that was fantastic..." and then, after a pause that showed she was trying to come up with the right words, gushed, "it was just so f#*!ing GOOD!"