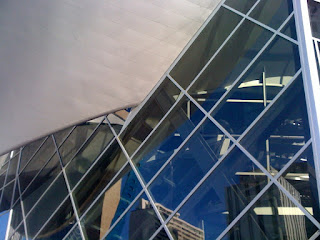 ever since listening to randall stout talk about the AGA, i've been jonesing to get inside the building. this morning, shannon set it up.

the AGA is as photogenic indoors as it is from outside, even on a dull day. i hadn't expected to see art, but two of the opening shows are mounted. the goya drawings were hard to focus on, given my excitement, but the karsh photographs blew me away. karsh canadians was the first art book i ever remember seeing in our house; karsh was the first photographer i knew by name. and here he was, along with everyone who mattered to the twentieth century. "who's that girl?," asked morgan (5). "that's queen elizabeth," i answered, "but it was taken when she was still a princess, nearly 60 years ago." "what about this girl?" "audrey hepburn. and look, morgan, that's pierre elliott trudeau, canada's most famous prime minister. here, let me show you this one." i knelt down and put my arm around her. "this is one of the most important people who's ever lived. he was in prison for 27 years, but when he got out, he ended racism in south africa." morgan's eyes widened in seriousness, and then she and her friend were off for another look at HRII's tiara.

as for me, i turned around the gallery slowly, gobsmacked. there was glenn gould, concentrating so hard you could hear him humming. fidel castro. helen keller. rene levesque. mies van der rohe. pablo casals, forever playing to that expectant stone yard. these images are so iconic you actually forget they're also somebody's photographs - that is alfred hitchcock, not a portrait of him. behind me someone said, "oh, man, i remember that one. that's levesque!" after a seeming lifetime of annie leibovitz's pictures of l'il kim and courtney love, it was really moving to stand face to face with nehru. 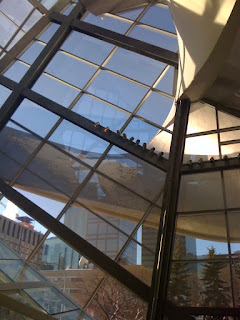 when we'd had our fill - who knows what time it was? - we repaired to the duchess bake shop for cappuccino and scones. (not mo, because a perfect saturday for mo always includes the laundry.) the sun was out, and it was nudging toward zero. ted and i got caught up at one table for two, while nat and susanne sat at another; when a table for four opened up, we reconvened there to talk about how to plan a good vacation. after ted left, the three of us headed across the street to thread hill, my favorite boutique. because today was a magical day, everything was 25-70% off. once nat and sus headed back to their puppy, i made my own way home, stopping at don antonio's for hot salsa and corn chips ("buenas tardes a usted," etc) and at hellas greek food for feta and olives, the sun still echoing gently off the 124th street walkups.
Posted by Heather Zwicker at 8:40 PM

We're gonna need Mo to spend her Saturdays in our laundry room. We are much better at coffee & scones at art galleries.