one of yesterday's questions - what's the best vacation you've ever had? - is still rolling around my otherwise empty head.

my first inclination was to say buenos aires, because i so love that city. but that answer ignores how dirty it was, and the fact that i was robbed, and how lost we were with porteno spanish, and how ready i was to go home when we did. the objective evidence suggests BA was not in fact our best vacation, if by that you mean a smooth period of carefree bliss where everything goes well and every moment brings new pleasures.

then again, if it's moments you're talking about, i'd have to name nevada 2006. in the last week of our trip, we both started to feel maudlin, and arriving at great basin national park only made it worse. "it looks like jasper," we agreed. we sat glumly in a campsite for a few minutes, then got back in the car and headed south for six more hours, ending here: 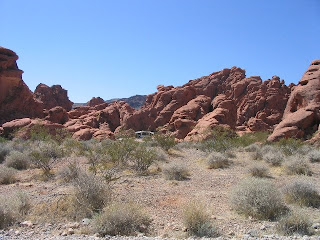 another great vacation: new york city, the year i got tenure. we stole five days around the november 11th holiday and visited deidre in manhattan and catherine in brooklyn. the city was so loud we couldn't sleep, and as i recall the weather sucked, but it was the trip we learned to vacation together. i was advocating for van gogh at MOMA and dance at the joyce, while mo's idea of heaven was a corn dog at coney island. (i wasn't aware until then that coney island was in new york.) going to NY with mo made my world bigger. 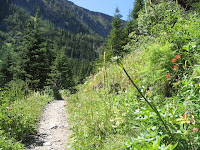 or maybe we learned to travel together the summer before, in waterton. each of us planned a day, free from debate by the other. on my day, i hiked carthew-alderson, an 18-km one-way trail, and on mo's day we tore around red rock canyon on rented scooters.

the northern alberta tour of atrocities (summer '99?) - to hythe, where wiebo ludwig had just been arrested for the first time, and to fairview, home of the cooper-snider murder case - was filled with calamity: the car failed to start at the end of a deserted dirt road well into the front ranges, and the french press coffee maker exploded, burning me quite badly, and we almost hit a deer. yet i think of it fondly. ditto the southern BC tour of atrocities the following summer. we saw TB sanitoria, WWII internment camps, and logging clear-cuts, but on april 28th we caught the first ferry of the season across lake revelstoke, under a bright full moon.

this spring's trip to utah would qualify as a bad vacation, given that we received troubling news about a dear friend early into it. i found it hard to completely relax while worrying what was up at home. yet that's also the trip we saw bryce and zion, cycled the colorado and hiked horseshoe canyon. so - a good vacation, no?

london, feb 2007, was terrific: imagine taking kids to the tate. 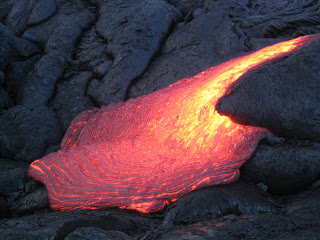 riding that little cesna to molokai (may 2003) was like taking a holiday to the 1950s. watching the planet produce itself at volcanoes national park was mind-blowing even in the sulfurous deep night heat.

we had fun in boston 2004 - remember taking the train back to NY with crazy phyllis? and what about the first season we had the tent trailer? lightning storms at big knife; the river boat tour of chicago; scottish glens and irish roundabouts; shell casings in the black rock desert; making it out of death valley alive. oh, our first ski trip together, when mo was so broke she wore brown corduroys, a fuscia headband, the purple skis we bought at play it again sports, and the yellow-red-turquoise OP jacket she had in high school! laughing ourselves silly at the KFC in red deer while we counted out our last thirteen cents. hope BC....

the word vacation comes from the latin vacatio, meaning freedom or respite, and it's been in use in english since at least 1386. vacation is frequently paired with leisure, also signifying freedom or opportunity. and this confluence points to why i think vacations are important: by definition, they make things possible. vacations release you from the habitual, take you away from your everyday preoccupations, and thereby put you in the way of the unexpected. you can have unexpected moments in the everyday - yesterday felt like a vacation - but these moments stand out when they're decontextualized.

by this definition, every vacation is a good one.
Posted by Heather Zwicker at 11:49 AM

Yeesh, given your track record, maybe you shouldn't vacation so much!

it has been so long that i have had a vacation that was not work related, but the last two years i have been to new york city, san francisco, new orleans, detroit, and tomorrow, upstate new york. conferences mostly, but also shit loads of times in libraries and archives.

i liked new york, but hated the subway, and didn't fall in love. everyone told me that i would love SF, and it was pleasent, but it didn't blow me away. NOLA was a place i keep thinking about, keep wanting to go back, it had resillence and hope, plus the sex and food were out of this world, (though i was robbed as well), detroit broke my heart.

i travel most often with pat, who i love and is low key--he is doing the driving this time, and it is a combo of stuff i really want to see (the sacred grove, dia:beacon) and work (show in poughkepsie, archives in rochester) and compromises (i have seen more baseball in my life then i ever thot was possible)