this city is so very, very beautiful your heart aches to be present in it. every street you walk has something going on. every building is made for gazing. you look, and you see, and then you look again, and realize you've seen nothing. that carving above the door is a scowling face; the one over there is smiling. that statue is emerging from a sheaf of wheat. that mural 30 storeys in the air is made of gold. it's a city that resists being photographed, and begs for it. 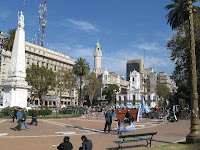 today we walked from the plaza de mayo to the congreso. from the plaza de mayo you can see the building from which evita addressed her admiring crowds. the plaza is still the hub for all kinds of political activity. today the protest was about soldiers who fought in the falklands war on the mainland. the government of argentina does not recognize those battles even though apparently the british made several forays onto argentine soil. the veterans want recognition. last week, casino workers were demonstrating for better working conditions. but of course the ground zero of politics here is las madres de la plaza de mayo. every thursday afternoon, still, the mothers of the disappeared march through the square wearing their signature white scarves, protesting the deaths of their children. las madres are old now, and the movement has many elements to it, some of which have disbanded the thursday marches. i simply can't get over the sheer bald fact of mothers marching to commemorate their children's deaths. it is as forceful in its simplicity as the disappearances were bald.

not far away from the plaza we happened upon la casa de las madres. it's a big building with a bookstore in the front, a cafe down the middle, and a meandering open area at the back, with offices, bulletin boards, a high-ceilinged dance floor/meeting room, and stairs to a second floor. there were three people staffing one of the offices. a laser-printed sign on the office door opposite read "bienvenidas comandantes." hanging on the walls and presented around the hallways were artistic renditions of las madres: a huge blow-up photograph of three smiling grandmothers in white scarves; a bronze statue of a woman giving birth to death, politics and defiance; a garish painting. most moving of all were three huge display boards on which were pasted 3x5 inch photographs of the disappeared. the photographs were black and white, and frayed with age. the people in them sported 1970s moustaches and early 80s farrah fawcett dos. one board had 180 photos, the next 260, and the largest, 440: 880 of the 30,000 people who were disappeared. to hear activist groups tell the story, disappearances still take place. the scale is much, much smaller, but nearly every group that demonstrates at the plaza de mayo tells a story about a member who has vanished under mysterious circumstances.

back outside, on avenida de mayo, we came across a police station. like so many other BA buildings, its architecture is exquisite. but i didn't feel comfortable taking a picture of it. the military and the local police officers worked hand in hand to effect the disappearances. this means that you just never know what you are looking at. were people tortured in there? killed? you look, and you see, and then you look again, and realize you've seen nothing.
Posted by Heather Zwicker at 8:38 PM