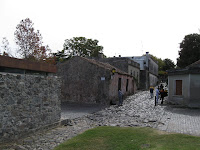 for someone like me, trained as a postcolonialist in the english tradition, colonia is an uncanny place. it reminds me of english colonies like fort edmonton, or fort louisburg in nova scotia (okay, french and english traditions) but colonia, caught between the spanish and the portuguese, is all catholic all the time. it's also really pretty. i've loaded pix here.

we met up with my cousin bevan, his wife kirsty and their two children, findlay (10) and janine (8). bevan's in uruguay doing a forestry project and kirsty teaches ESL. they were the consummate hosts, so generous we'll never be able to repay their hospitality. as you know from an earlier post, kirsty planned a marvelous weekend for us, and bevan drove tirelessly. we like them because they're curious about the world around them, easy-going, smart and fun. if you are reading this, thank you again, so much, for everything.

our time in colonia was mostly about sight-seeing and getting to know each other a little more. to give you a sense of why we like these guys so much, let me tell you about eating lunch at a little restaurant called lobo. kirsty and janine ordered pasta, mo (of course) ordered beef, bevan and i had lamb with fried cornbread in a tannat (wine) sauce -- i know, i know, poor little lambs -- and findlay ordered a hamburger. when it came, it seemed to be a breaded patty prettily arranged next to a mass of mashed potatoes. "oh!," he said. "so that's a hamburger."

sometimes you just gotta take it as it comes.
Posted by Heather Zwicker at 7:56 AM