we walked the breadth of the city, marcia and i. we didn't necessarily mean to, but we had rhythm, energy and curiosity enough that at each turn we just carried on. 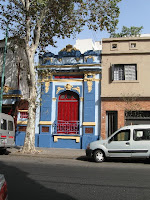 we started in pretty palermo, with its two-storey buildings and big green trees. marcia and her family are staying in this part of palermo viejo, palermo soho. it's full of cute little shops and the dreaded yoga studio. mo and i are staying across the tracks in palermo hollywood. on the whole, our neighbourhood is rougher, yet gentrifying more rapidly. 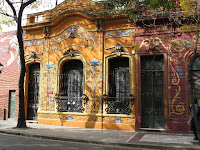 we stopped at the museum of carlos gardel, the famous tango singer. i love museums organized around the cult of personality. on display was a telegram he'd sent from europe. just think: the person who typed that telegraph got it from a transmitter in europe who talked to a clerk who spoke with gardel himself!! just beyond the gardel museum, in abasto, lies once, the jewish district. you can see it in the movie el abrazo partido. our part of once was the tailors' district, including mannequin row. we have no idea who uses these giant mannequins, nor who sells the clothes that would fit them. 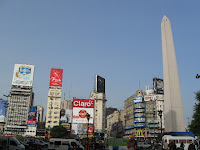 once leads to monserrat and the back of the congreso we saw the other day. then lavalle opens onto the obelisk. the massive avenida 9 de julio separates monserrat from the central business district, microcentro. i love the way my little 35 mm crunches the skyline here. it's just how you feel. 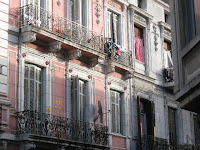 san telmo, an older part of buenos aires. the sidewalks here are so narrow the buses brush your arm as they storm by. finally, la boca, with its brightly painted storefronts. on the left is the store where i bought a football jersey for darien -- a BOCA jersey, of course. most of la boca is not tarted up for tourists. it's a working-class district and looks it.


of all the visual pleasures this day afforded, perhaps none was as exquisite as seeing marcia herself: watching her face as she talks, witnessing the way she moves through space. i got to see her think, and laugh, and inquire, and tell... we haven't had this much time together since before the twins were born in 2002.
Posted by Heather Zwicker at 5:10 AM