Sixth mountain from the west

that – sixth mountain from the west – is how the city of montevideo got its name. “monte” is easy; then you’ve got your roman numerals “vi”; “de” (from); the west (“oeste”). bunched into that little anecdote is all sorts of rich stuff: the city’s spanish/portuguese colonial heritage along with the extirpation of uruguay’s indigenous population; the fact that montevideo orients itself toward the outside, principally argentina and brazil, between whom uruguay remains a buffer; that the city is all about its port; and that its heyday dates from the days when we still used roman numerals.

caveats: we were there only for a day, and that day was a sunday in the late fall. cities always look more desolate when shops are boarded up and no one is going about their daily business. also, liveliness is seasonal. downtown edmonton looks pretty desolate in november, and nobody raves about london in early march.

still, the obvious and in some cases egregious neglect of montevideo’s astonishing architectural inventiveness and beauty was heartbreaking. it seemed to me that everywhere you turned you could read signs of the city’s troubled economy. the troubles include an aging demographic, the 1973-1985 military dictatorship, and what is delicately referred to as “recent economic difficulties,” which i take to be code for disproportionate dependence on argentine wealth – it’s not just for political reasons that uruguay is considered the switzerland of south america.

driving into the city from the east, you first see the massive facade of newish condos facing the sea. it’s a massive wall of outward-facing life, and the living looks good. according to findlay, everybody’s grandparents live in montevideo. you are right on the ocean, which is protected public property featuring a 25 km seawall. on sunday afternoon the promenade was full of runners, dog-walkers, strollers and the elderly, and, of course, the ubiquitous dogs.

take that ring road around the point, and you come across one of the most astonishing things i’ve ever seen in a city: public housing projects right on the beach. in fact, tenements have arguably the best views in all of montevideo. i don’t object to this, of course – i think it’s fantastic – but in any other city in the world, this land would have been “redeveloped” ages ago. what has protected this? the government now is broadly socialist, and the communist party in uruguay is strong, but the military dictatorship was hardly left-wing, and it’s been years since the government’s been able to afford its erstwhile admirably generous social services. the projects appear dilapidated enough that it ain’t sociocultural love that’s keeping them alive. the message i got is that not even developers believe in montevideo. turns out there is something more chilling than gentrification.

fish-hook around to the ciudad vieja (the old city) and you can see what all those sea-viewing condos have turned their backs on: some of the most gorgeous colonial architecture in any hemisphere, in a shocking state of neglect. some of the buildings have been restored – the teatro solis in particular is stunning, the old city gates are currently being refurbished, and one of the city’s best shopping malls is in a former prison (which has nice symbolism) – but much of it droops drearily in despair. here is a picture of what i mean: 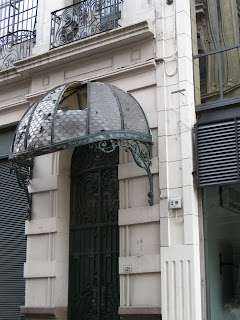 just before sundown and our ferry back to buenos aires, we happened upon a flag ceremony at the uruguayan parliament buildings. a big green military van disgorged eight soldiers in dress uniforms and one in camo to take down the flags down before sunset. the sword-bearer and the trumpet-player stopped at the middle of the top stairs and waited for the two teams of three to take down the uruguayan national flag on the left and the artigas flag on the right. the artigas flag has become a symbol of uruguayan independence, though ironically its history is bound up with regional cooperation. as kirsty told the story, the red slash across the middle stands not for the blood that has been shed in the service of uruguayan independence, but for the blood that will be shed to protect it. (wikipedia, incidentally, gives a more sedate explanation.)

anyway, back to our honour guard. the fellows on the right were having trouble unfurling the artigas flag, which had flapped itself into quite a mess. one soldier worked at it for a while, flinging the up rope this way and the down rope that way, trying to dislodge it somehow. then he flung the down rope this way and the up rope that way. still no go. the rest of the honour guard and about a dozen curious onlookers waited. he tried again. nada. the trumpet-player looked at the sword-bearer. the sword-bearer looked at the uruguayan flag contingent, whereupon the low guy on that totem pole leapt into action. he jogged across the stairs and took one of the ropes from the hapless artigas flag manager. together they flung the up rope one way and the down rope another, until they finally got the flag to fly. the helper sprinted back to his place, and the flag men seized their ropes. the sword bearer raised his sword and the trumpeter his trumpet and, to one round of “the last post,” they started lowering the flags. the song was over long before the flags were down, so we all stood in silence while they took the flags all the way down.

now, i don’t know about uruguayan customs in particular, but i know enough about flags in general to know that that point of sending in white-gloved honour guards is to avoid dropping the flag on the ground. this principle was observed in theory. in practice, though, these guys burned their flags a couple dozen times. ‘whoopsie, that’s a bit heavier than i expected,’ conveyed the face of one soldier, as he rescued his corner of the uruguayan flag from the dusty stairs. the guy at the end of the artigas flag line appeared to be daydreaming as the flag accordioned into his arms and then beyond them, down his side to the parliament steps below. two other guys on the uruguyan side might not have worked together before, their faces betraying a certain irritation with each other. the whole spectacle was like a john cleese spoof or a brechtian comedy.

once the flags were folded safely away to fly another day, the honour guard made their ceremonial walk back down the parliament steps. there, they rather unceremoniously threw the flags into the back of the van and clambered in themselves. no sooner were the van doors closed than they started taking off their fancy hats and dress sashes.

this story of montevideo is better with pictures, but i didn’t take a lot of them. if you’re interested, though, they’re here.
Posted by Heather Zwicker at 2:24 PM